In Belgrade, on the 24th of November, 2015, the memorial bust of Milorad Pavić was revealed on the building where he lived and where his Bequest is located. The bust and a memorial, which was made by a Russian sculptor Gregory Potocky, is a replica of the monument which is located in Moscow, in the Alley of the Greats (atrium of the Library for Foreign Literature),  made by the same sculptor and placed there in 2009, when the writer was still alive. 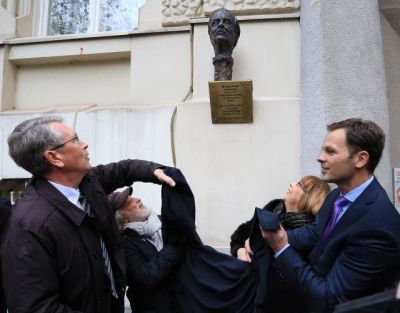 The memorial bust was revealed by Mr. Potocky, the sculptor, Mr. Siniša Mali, the mayor of Belgrade, His Excellency Mr. Aleksandar Chepurin, the Russian ambassador in Belgrade, and the members of Pavić’s family. Representatives of the City Assembly, tourist organizations of Serbia and Belgrade, Serbian Academy of Sciences and Arts were also present, as well as friends and journalists.

Mrs. Jasmina Mitrović Marić, advisor to the President of the Republic of Serbia and the Head of the City Commission for Monuments and Names of Streets and Squares also attended the small gathering in front of the building in Dorćol, and later in the Bequest of Milorad Pavić.

On the memorial bust in Braće Baruh Street it is written that the bust was made in 2010 to mark the death anniversary of Milorad Pavić (30th of November, 2009). It took five years for this gift of Russia and its sculptor to get to its rightful place.

The Russian BBC, which also covers Azerbaijan, published and interview named Baku is New York from the 1001 nights, on the occasion of the 6th anniversary of death of Milorad Pavić and Jasmina Mihajlović’s book ‘’On the Shores of the Khazar Sea’’ (Laguna, 2014), which was translated into Azeri and Georgian.