At the end of May, Jasmina Mihajlović spent five days in the capital of Georgia – Tbilisi, on the invitation of the Intelekti publishing house, which has started a project Pavić in Georgian within which it has published seven books, primarily reissues of Milorad Pavić's books, as well as Jasmina Mihajlović's book, ''On the Shores of the Khazar Sea''. Following novels were published: ''Dictionary of the Khazars'', ''Unique Item'', ''Second Body'', ''A Landscape Painted with Tea'', ''Last Love in Constantinople'', ''Seven Deadly Sins'', and soon ''The Inner Side of the Wind'' and ''A Short History of Belgrade'' will be published. Thirteen people – translators, editors, designers - have been involved in this publishing project. The editor in chief of the project Pavić in Georgian is a renowned Georgian writer and winner of many awards, Zviad Kvaratshelia.

During the visit Jasmina Mihajlović was constantly followed by photographs and reporters, and the editor Gvantsa Jobava, in order that a television program be made and also a book dedicated to the visit of two writers, Jasmina Mihajlović and Milorad Pavić – posthumously.

Jasmina Mihajlović visited the Intelekti publishing house, having talked to all employees about the literary work of the two writers. On the other hand, a four-minute-long inset for the national TV news bulletin was filmed in front of the monastery outside of Tbilisi, which rises above the former capital of Georgia, Mtskheta.

A literary evening dedicated to Jasmina Mihajlović's novel ''On the Shores of the Khazar Sea'' was held in the Tumanishvili Film Actors Theatre, where a concert was held by the pianist Ketevan Chkhartishvili, in Mihajlović's honour. 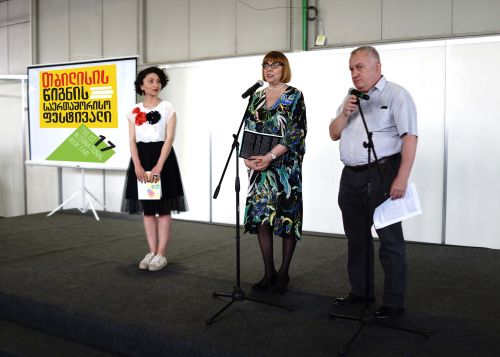 Having in mind that the visit was being planned during the opening of the 17th International Book Fair, Jasmina Mihajlović, their special guest, has been honoured to open the Book Fair, together with the Mayor of Tbilisi and the Georgian Minister of Culture. Billboard with the photograph of the literary couple Pavić – Mihajlović was the most dominant in the hall. Then Mrs. Mihajlović was signing her and Pavić's book at the Intelekti stand, which have a special status in Georgia.

During the literary evening held in the House of Georgian Writers, a beautiful palace with a garden, Jasmina Mihajlović was talking about the literary works and life of Milorad Pavić; a documentary on this Serbian writer followed.

Jasmina Mihajlović then visited the capital of Azerbaijan, Baku, where a significant part of her book ''On the Shores of the Khazar Sea'' takes place. The international career of this books has actually started with the translation of this book, which will have been published in Russian by the end of the year, and next year it will be published in Chinese. Mrs. Mihajlović has already received a formal invitation for the promotion of her book on the Shanghai Book Fair, which will take place in October, 2016.

In Baku, Mrs. Mihajlović has paid a formal visit to the Embassy of Serbia, where she has informed the Ambassador of Serbia, Mister Nebojša Rodić of her visit to Georgia, which is a friend of both Serbia and Azerbaijan. 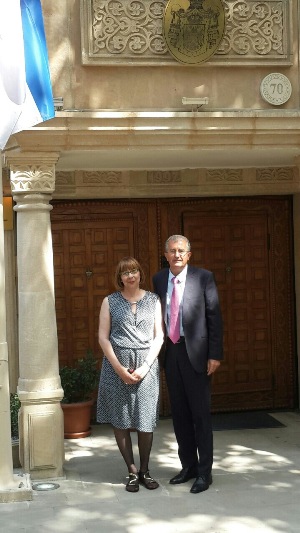