Jasmina Mihajlović’s autobiographical travel book ’’On the Shores of the Khazar Sea’’ (Laguna, 2014) will be published in Baku, in Azeri, then in Georgia, in Georgian,where the author will be the special guest of the Tbilisi Book Fair in May. The Russian translation of her book will be published by ’’Amfora’’, from Saint Petersburg.

The December issue of the luxurious Azerbaijani literary magazine ’’Kitabči’' (''The Book Shop'') had the photo of Milorad Pavić and Jasmina Mihajlović on its cover, while in the magazine eight pages were dedicated to this literary pair and their prose. Along with the interview given to Azeri writer Selim Babuloglu there were excerpts from ''On the Shores of the Khazar Sea''. 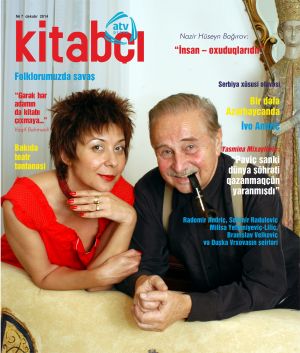 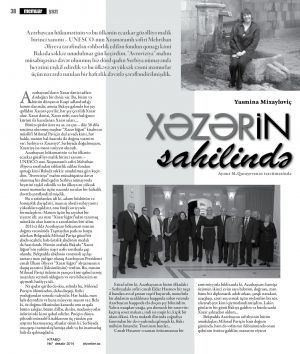 The enourmus success of Milorad Pavić in China, with ’’Dictionary of the Khazars’’, was crowned with the 4th deluxe edition at the end of the last year. Up to this day the Chinese have published ’’Dictionary of the Khazars’’ in hardback, as an e-book, then also a clothbound edition with a protective box and illustrations on a bamboo paper, with the geneaology of the characters of the book throughout all three period during which the book takes place, and the latest red clothbound edition is a real masterpiece. It is made as an old, antique book, with lavish illustrations, it has a map of the old Khazaria, and in the end of the book there are verses of Judah Halevi, one of the historical characters in the book.

Numerous Chinese journalists and writers have been visiting the Bequest of Milorad Pavić over the last years, thus including in their luxurious travel magazines the Balkans, Serbia and Belgrade through the literary work of Milorad Pavić and his Bequest.

During the last visit Shanghai writer Chen Danyan, who deals with the philosophy of traveling as well as Shanghai during the first decades of the 20th century, made a TV show for the Chinese television, for the Internet portals, and even for Chinese mobile telephony! She also traveled around Serbia using topography from ’’Dictionary of the Khazars’’ as a map, so the new Chinese edition of this bestselling novel translated in 36 languages will have a map of Serbia, which could be named ’’Serbia: Following Pavić’s Trace.

Bulgarian graphic artist Yassen Panov, has made a bibliophile edition of ’’Dictionary of the Khazars’’ in Bulgarian. He has been working on it for 20 years. The promotion and the presentation of this book-object took place in February in Sofia, Bulgaria. Jasmina Mihajlović attended this exciting culture event. The book is placed in metal bearing and it consists of 244 separate graphic pages. The front cover was made of heavy molten glass which get into the grooves of the metal bearing. Panov’s style of black and white graphics mostly reminds of Dürer's graphics and Da Vinci's drawings with a special touch of Yassen Panov's art fantasy. This edition will be presented on the Bologna Book Fair, and the artist will also make an English version (page layout) of the book's texts. In 2016 the publishing house ''Dereta'' will publish a more suitable edition resembling a real book, but it will be in English, because the publisher is preparing Pavić's novels in English, having in mind that ''Vulkan'' has published The Selected Works of Pavić in 10 books (paperback and clothbound in a protective box) in Serbian on the last Belgrade Book Fair. 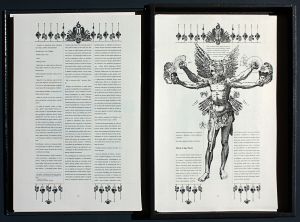 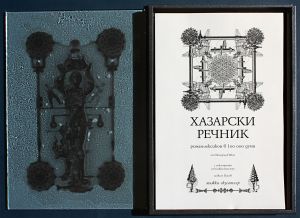 Jasmina Mihajlović has given an interview to the March issue of the Serbian version of the Newsweek, for the column ’’Wives of famous writers’’.