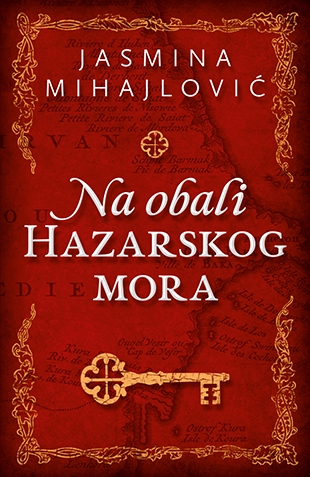 In March, 2014, Jasmina Mihajlović published a new book ‘’On the Shores of the Khazar Sea’’. Amazon.com was the first to publish this book translated by Dragana Rajkov, and then Laguna published the book in Serbian, Jasmina’s mother tongue.

Readers have before them a very unusual autobiographical love story. Wrapped in a travelogue through exotic Azerbaijan and a series of private-public memories, it tells of the love of two writers whom death could not part.

Smooth, at times scathing, often melancholy, Jasmina Mihajlovic’s book On the Shores of the Khazar Sea is the testimony to the great love of two Serbian authors.

In this novel the reader will also get a glimpse of Eurosong in Eurasia, find out why in Azerbaijan the Caspian sea is called in the Khazar sea, follow wondrous events to the ends of two continents, but will also have the opportunity to learn about the turbulent, unconventional life of two artists, in Serbia and outside it.

“The Khazar Sea is unlike any other sea or ocean; it resembles a sea of dreams, even more so a sea woven from the Other Reality, but mostly what it in fact is – A SEA OF LOVE. In such (both virtual and actual) temporal and spatial coordinates we encounter the coauthoring couple, who are also the main protagonists, of this book: here Jasmina Mihajlović and Milorad Pavić find their eternal home, for here Love is eternally embodied in Word..."

Notes on the author

Jasmina Mihajlović is the author of travelogues, essays, novels. Her novel The Paris Kiss was translated into Russian (published by Azbooka) and English, where it can be found on Amazon as an e-book. She is the editor of the selected and collected works of Milorad Pavić. Since Pavić’s death she has been the testamentary heir of his copyrights and the curator of the "Bequest of Milorad Pavić”, founded by the City Assembly of Belgrade.

As a novelist Jasmina Mihajlović nurtures the eclectic genre of travel-epistolary prose with traces of anthropological essay and private memoir, which unfolds with the suspense of a thriller, horror and great love story.

On the Shores of the Khazar Sea . The Love Story of Two Writers is her new book after a literary pause, as after her husband's death she was busy with the posthumous publishing of his works throughout the world and managed to publish over 60 editions from 2010-2013 in America, Russia, China, Korea, Indonesia, France, Greece, Georgia, Mongolia, Slovakia, Bulgaria, Turkey, Albania, Azerbaijan, Mexico, the Czech Republic. The most difficult task was to publish Pavić’s books in Serbia , in his native language.

Media on ''On the Shores of the Khazar Sea''