At the opening ceremony of Embassy of the Republic of the Azerbaijan 8th June 2011. in Belgrade, Milorad Pavic’s Bequest an Foundation gave to the city of Baku facsimile of the manuscript „Dictionary of the Khazars“. A facsimile is handed to the President of Azerbaijan Ilham Aliyev, in the presence of Serbian and Azerbaijani Foreign Minister, numerous guests, representatives of the clergy and diplomatic corps.

In the newly reconstructed Tasmajdan park 8th June 2011, in downtown of Belgrade a monument dedicated to Milorad Pavic was unveiled . Monument was revealed by Serbian President Boris Tadic and President of Azerbaijan Ilham Aliyev. 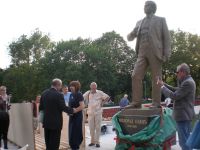 In theater Prijedor (Republika Srpska) a play Petkutin i Kalina had its premiere on 7 May 2011th, by texts of Milorad Pavić and the adaptation of director Gradimir Gojer from Sarajevo. With the subtitle Play Pavich in the play are primarily used components of drama „A Theater Menu: For Ever and a Day“, but also excerpts from the novel „Dictionary of the Khazars „,“Landscape painted with tea“ and Milorad Pavić’s stories.

Earlier this May Jasmina Mihajlović a writer, who manages Milorad Pavić’s Bequest and Foundation held lecture in Institute for Literature and Arts, entitled „ M. Pavić novels on E-book Kindle reader“